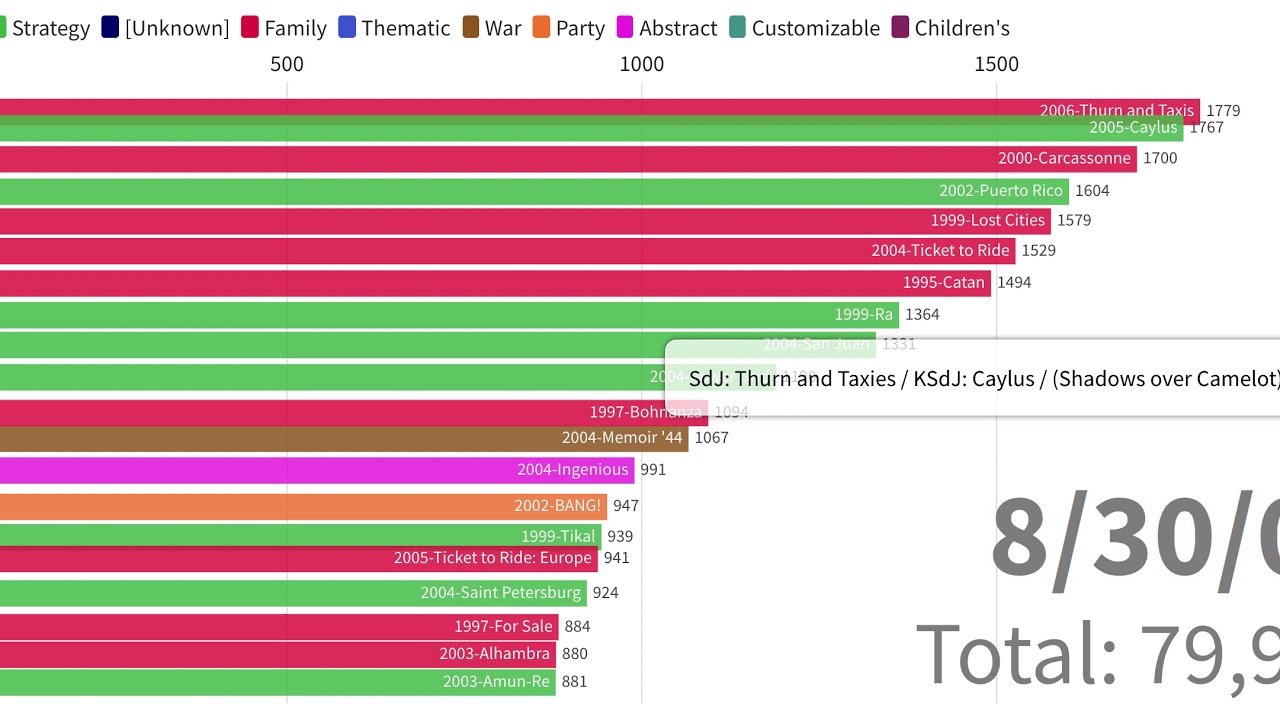 The number of plays logged on BoardGameGeek.com over the course of 4 months, in the past 20 years.
I was curious to see if using a more “factual” data model to rank games surfaces anything interesting that scores and votes doesn’t, so I started to collect play data. Dumping the data in a bar chart race surfaced some very interesting trends; Mostly, that there aren’t any obvious “winners”. Except a handful of them, most games have a short time in the limelight before being replaced by newer, trendier games.
The chart also shows the massive growth that BGG and the whole community saw in the past 20 years.

Some points about the data:
* This is version 2 of the chart, with a fix to how sessions are counted. the previous one is available here:

* The data is obviously biased towards the kind of people that log plays, and the kind of games they play, but surprisingly the results weren’t as skewed as I expected them to be.

* The numbers represent sessions, and not plays, so that the results aren’t biased towards quicker games which might be played as a few rounds in a single session (for example, Love Letter vs Terraforming Mars).

* I used 4 months as a time window because I am limited by the charting tool to 60 dates.

* Some popular games have a popular digital version (Dominion, 7 Wonders, etc…). The data model in BGG doesn’t have a way to differentiate them while logging the play (only a Location field). There are ways to project and account for the digital plays, but I decided to simplify stuff (and not introduce accidental biases) by ignoring this fact.

* I set the chart to show 20 entries (and not the default 10) because a lot of the action seemed to happen below the fold (for example award winning games often don’t top the chart, but do raise in popularity after winning, check out Hanabi in 2013)

* Because of the constant changes, I set the animation speed low enough so there’s time to take everything in.

* The categories are taken from the 8 “family” rankings that BGG track. For most games there is a single one, but for ones which are classified using 2 I picked the one where the game is higher ranked.

* A few of the titles didn’t seem to fit the normal classification. Either the game is broken up into multiple entries (e.g. Unlock), or the expansions are self-contained enough so that people log plays directly on the expansion (e.g. Dominion). I used the game family instead and grouped all entries together.

* The data is based on about 2500 entries in the BGG DB, but is not complete, as there is no direct way to query this data in its entirety. The games where sourced based on rankings, votes, and several lists including reviewers, and trackers. It’s unlikely that the top games for each trimester are missing an entry, but the total counter might be off by a bit.

* The data is based on the BGG XML API ( Most of the work to produce this visualization was to automate obtaining the data set itself. I wrote a whole system to interact with the BGG API in Python.

* The chart is completely auto-generated. I didn’t update or “fix” any data point manually. No games are special-cased.

* The chart was generated using Flourish. ( color-blind friendlier colors were taken from: