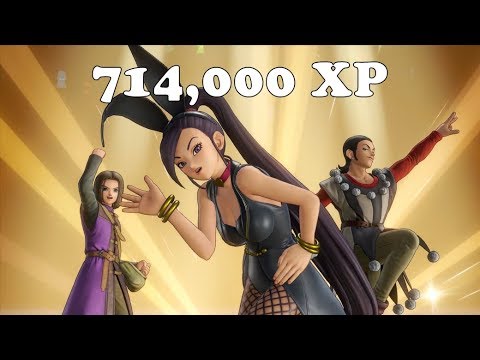 Go and support the following artist.

At 10k subs, I will be doing a Art Commision giveaway for subscribers. The winner will get a special piece of art commissioned for them by ANY of the artist who have allowed me to showcase their work. So make sure you go support as many of them as you can and you could win a special piece just for you.

In the video i earned around 714,000 XP in about 12 minutes. It could have easily been around 1 Million if I had let the normal hands spawn more enemies until they couldn’t spawn anymore. Also at higher levels you can summon King Metal Slimes and 2 Liquid Slimes, which would’ve given way more XP than the 2 normal Metal Slimes and 1 Liquid Slime i had.

Defeating more enemies under the effect of Haulellujah will increase the XP at the end of battle.

Since this is Endgame grinding, I will assume you have all characters and decent skills from the Skills chart.

Most Metal Hands spawn with a normal Hand monster. You want to kill the Metal Hand and they leave the normal one alive. The normal one can call for backup (up to 25 times or until the Alphabetical value reaches Z). Once you kill the Metal Hand, you want to use Haulellujah. You can come into the battle with Haulellujah ready to use. For the video, I just defended and keep the enemy count usually between 2-5 hands until everyone was ready. After using Haulellujah, you want to use Electro Light. You can wait until you have defeated Hand Y (leave one of them alive) to use Electro Light to maximize the XP you get.

After using Haulellujah, Jade will have to regain her Pep. The Main Hero can regain his Pep at anytime with a skill. It’s best to have Sylvando in the back already pepped. If not, you can bring him out and defend until you have all 3 of them pepped. There is an item that can instantly Pep up a party member, but I didn’t have one at the current time of recording. Electro Light can spawn Metal Slimes or Robots. Metal Slimes will significantly increase the XP you earn, as you have already boosted it with Haulellujah. Robots will still give XP, just not as good.

The easiest way to defeat Metal enemies is by hitting them with critical hits. Erik has a guranteed critical hit skill, and a few othe characters have skills that have a higher crit chance. Some skills only have 2 outcome such as Thunder Thrust. Thunder Thrust either crits, or misses. Metal Slime and Liquid Metal weapons are another way to deal damage to them.